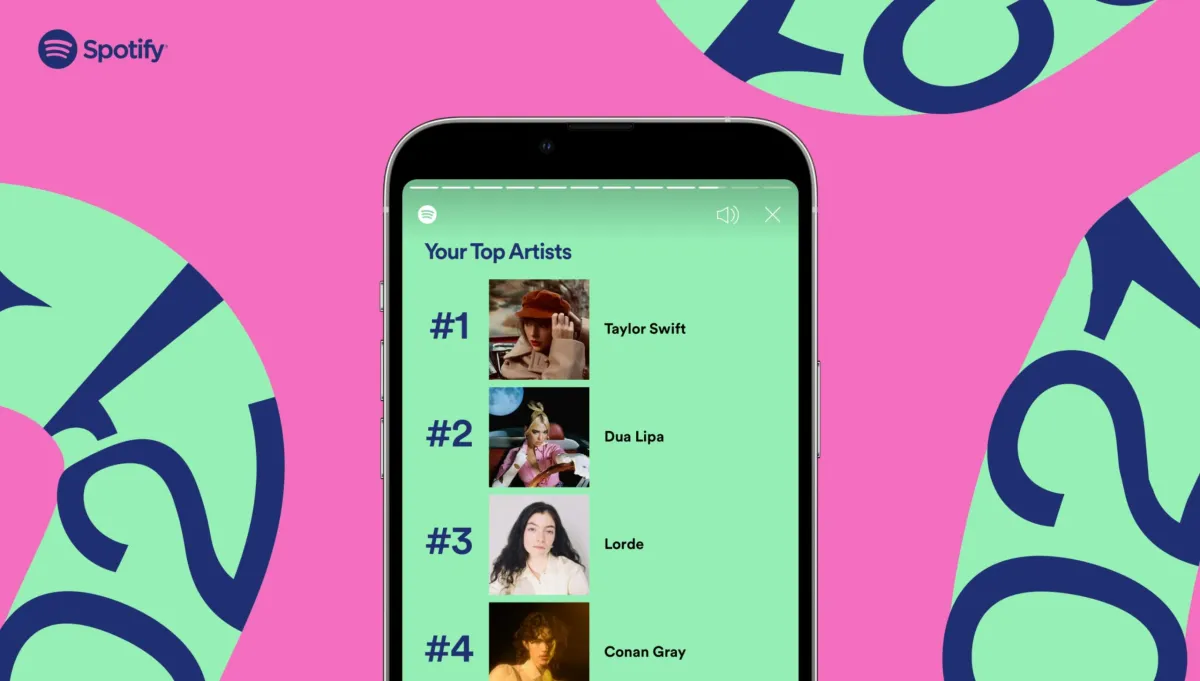 At the beginning of December, every single Spotify user receives their very own Spotify Wrapped–a comprehensive analysis of their annual listening habits on the app. Then with a click to share it, people go on Instagram, Twitter, and even TikTok to show off their music tastes with a certain enthusiasm that you don’t see every day. In a way, Spotify Wrapped has become an end-of-year ritual no social media user wants to miss out on. However, it wasn’t until last year that it was presented in such a colorful, social media-centered fashion; it used to be provided through an email link that directed you to a website. Now, the data is displayed in a video format and Instagram story-like way that is shown directly in the app for users to easily digest and share to other platforms.

Because pretty much every single social media app has added the Instagram-style stories feature due to its popularity (though it originally came from Snapchat), it’s fairly obvious to comprehend that it was the stories design that truly sparked Spotify Wrapped’s success. According to Forbes, when it was first unveiled in 2019, “more than 60 million users engaged with the in-app story experience.” Two years later, it is all anyone has talked and posted about since the day it came out.

Now, Spotify Wrapped has been around since 2013 and it only started to use the aforementioned style when the artist Jewel Ham came up with the idea as a Spotify design intern in 2019. She had no idea her work “would become such a big part of Spotify’s current Wrapped iteration,” as put by Refinery29, and never get the credit for it. She revealed this on Twitter as this year’s Wrapped came out, stating how she came up with the concept during a summer internship at Spotify and included detailed design proposals for the format that has proven so popular.

Ham said that she was a Spotify user who loved Wrapped, “but it was just a link they would send at the end of the year.” Amid her internship, she reimagined the data into something much more dynamic that existed on social media. “When I gave the presentation at the end of my intern project, it was received really well. They liked the idea. That was my last day.”

Refinery29 then reported that when reaching out to Spotify for a comment, they denied that any of it was accurate. A spokesperson for the platform said, “Spotify is proud to provide young talent from all backgrounds with the opportunity to create, contribute, and learn alongside some of the best teams in the business. Since Spotify’s Wrapped concept was first introduced in 2013, hundreds of employees have contributed ideas and creative concepts that have made the experience what it is today. While ideas generated during Spotify’s internship program have on occasion informed campaigns and products, based on our internal review, that is not the case here with Spotify Wrapped. It’s unfortunate that things have been characterized otherwise.”

Though indeed, Wrapped as a whole can’t be attributed to a single person, Ham’s work was undeniably essential to its success. The fact that the idea was first developed by a 21-year-old intern about to begin her senior year of college simply highlights the purpose of internships and who they’re actually intended to help. Internships tend to be promoted as a way for inexperienced young individuals to gain the skills and knowledge they’ll need in the “real world” and a title to put on their résumés–oh, and more often than not, a paycheck of zero dollars. On the flip side, large corporations obtain inexpensive or free labor, innovation, and creativity.

In corporate America, we often see how women, people of color, and so many other underrepresented communities are disproportionately affected by these types of labor exploitation. The American labor market is simply a reflection of how white, cis men receive the highest income, while marginalized individuals obtain low salaries associated with less desired work. What many fail to notice, or at the very least ignore, is that those new to the workforce also fall under a similar category of mistreatment. With zero work experience and the rule of social media, it is easy to understand how appealing it looks to work at a tech company with visually aesthetic workspaces and Internet-reliant cultures. However, it is precisely the inexperience of people that ensures internships continue to thrive in this labor system, further exacerbating its power imbalance. Because those seeking internship positions tend to not possess any work experience, they aren’t able to properly assess the value of their job nor negotiate a better footing for it.

The legality of internships is what makes matters worse with its origins dating back to the mid-20th century. In 1938, the Fair Labor Standards Act was passed, which required for-profit and non-profit firms with annual revenues of $500,000 or more to pay their employees for their work. But in 1947, the decision made in the Walling v. Portland Terminal Company Supreme Court case affected this act. The Portland Terminal Company had an eight-day unpaid training program for prospective railroad brakemen. Trainees sued the company in the hopes of getting paid and the case went all the way to the Supreme Court. Unfortunately for the trainees, it ruled that they didn’t have to be paid because they weren’t employees–they were “trainees.” Their work “does not expedite the railroad’s business, but may, and sometimes does, actually impede and retard it.” This case established a precedent for when it is legal for companies to refuse to pay future interns, using the reasoning that a company doesn’t have to pay an intern because “the intern is receiving more benefit from the relationship than the organization,” as stated by CNBC.

Regardless of how upsetting it may be, this is kind of expected from these companies. Daniel Ek, the CEO of Spotify with a net worth of almost $4 billion, believes that artists should be “recording and releasing music nonstop to make ends meet,” paying them almost nothing for it. On the other hand, artists all over the world, particularly songwriters, have criticized the business model that streaming services rely on. Spotify is dominated by more well-known artists and their major labor companies; they’re given top priority when it comes to the streaming service’s curated playlists, whilst smaller, independent musicians must develop new ways to promote their music without succumbing to the algorithm. This is because the revenues of each song are determined by the number of times it’s been listened to in contrast to the company’s most mainstream tracks.

These situations are truly a testament to how innovative ideas can be both a blessing and a curse when dealing with a company that only sees you as an expendable idea-churner for their much bigger scheme. They make us question the corporations’ perceptions of creativity and how much they really value it. As Jewel Ham put it, “At the end of the day, the problem here is not that Spotify stole my idea. It’s that I gave it to them.”