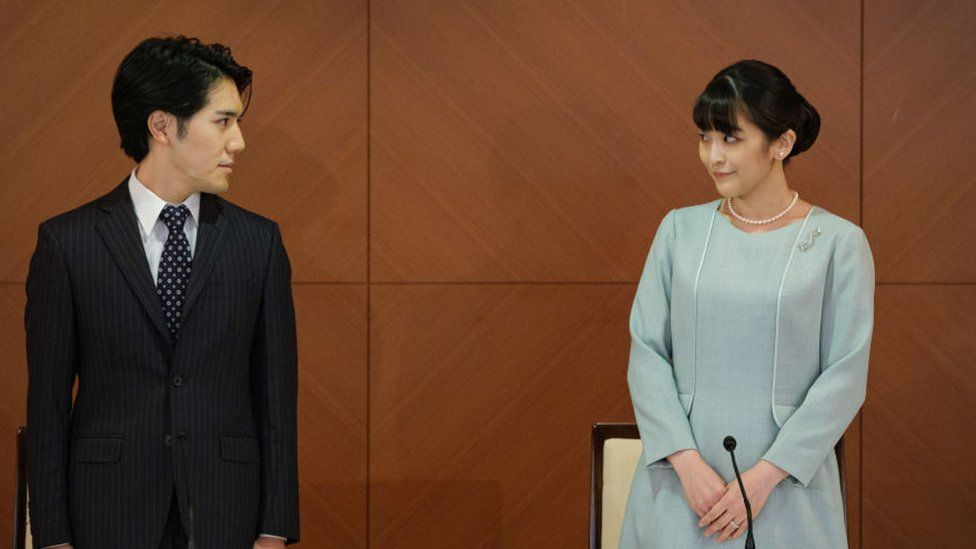 Princess Mako of Japan’s modest civil ceremony last month, devoid of the grandeur that royal weddings tend to presume, marks her change from Princess Mako to Mrs. Mako Komuro. Adopting her college sweetheart and commoner Kei Komuro’s surname and status has not only raised questions about Japanese imperial household laws but also about gender equality and human rights under the world’s oldest ongoing monarchy.

The engagement of the couple caused so much controversy that it resulted in a three-year wedding delay. It drove the couple to forego a formal wedding ceremony and instead register their marriage at a local government office. The former princess also turned down a $1.3 million payout granted to royal females upon their departure from the family–due to fears that what many consider a “problematic” marriage may benefit from taxpayer funds–becoming the first female member of the royal family to do so.

As a result of the aforementioned, Mrs. Komuro–niece of Emperor Naruhito and daughter of his younger brother, Crown Prince Fumihito–and her husband–lawyer who obtained his degree from Fordham University Law School–have plans to leave Japan for a new life in the United States. The decision has inevitably prompted comparisons between the couple and the British royals, Prince Harry and Meghan Markle, who moved to the States earlier this year amidst conflict with the Royal family. Mr. Komuro, just like Meghan Markle, has been the subject of substantial scrutiny ever since his relationship with Mrs. Mako was publicized; in this case, it’s due to a financial disagreement with his mother.

Coming back to Mrs. Komuro, some say that her fate of thwarted permanent royalty was decided long before she was born. The issue goes way back to the enaction of legal reforms while Japan was occupied by the US forces after World War II. Though the country’s postwar constitution ensures gender equality as well as equal rights for husband and wife, this doesn’t apply to the imperial family, as it’s administered by a separate set of laws–the Imperial Household Law. In effect since 1947, it declares that imperial daughters are forbidden from inheriting the throne and that should the daughter marry outside the imperial family, they will be reduced to their partners’ status. The problem is that marriage inside the family means marrying what could possibly be one’s cousin or brother. This limited amount of marriageable royal men is a clear result of cutting off the descendants of royal daughters from the family tree.

The couple’s marriage has also reduced Japan’s royal family population to an all-time low. The number went from 18 to 17 as Mrs. Komuro lost her status, and it may lower to 16 if her sister, Princess Kako, marries in the future. This isn’t to mention the older family members who may potentially pass away as well. To make matters worse for the family, because of such strict requirements, if the princesses’ younger 15-year-old brother, Hisahito, is unable to produce a male successor, the Japanese royal line will cease to exist with him.

Back when Japan was experiencing substantial political reforms under the US occupation, American forces did not feel the need to have the Imperial Household Law adhere to what they established for the constitution. Additionally, though the majority of the Japanese population want the royal monarchy to be more inclusive, “defenders of the status quo,” Kristin Roebuck from NBC News stated, “frame the current law of succession as inviolable ‘Japanese tradition’”–ironic considering the all-male royal bloodline is a fairly recent American development. This patriarchal and sexist resolution might just be what undermines the oldest imperial system that Americans were looking to uphold.

The ruling conservatives of the country aren’t much help either. They have obstructed the possibility of legal reform that could result in women being treated as equals within the royal family. From the looks of it, preventing change really has no benefits other than preserving the country’s most public embodiment of patriarchy, even if it entails its own downfall. Ultimately, Mrs. Komuro may be better off now that she has been relegated from princess to civilian and wife, with more liberty and rights than she would’ve had whilst being bound by the masculine and unchanging system.