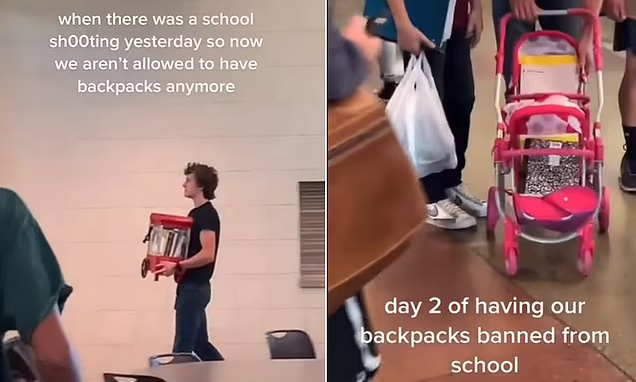 We all know that America has a serious school shooting problem and to stop the problem, schools in Idaho decided to ban backpacks, because apparently, a shooter is going to carry a gun in their backpack and only their backpack, because they can’t use a guitar case, a plastic bag, their shoe, or anything else.

After a teacher, Mrs. Gneiting, disarmed a student who shot three people and a gun was found in a 13-year-old’s backpack at Rigby Middle School in Idaho, the district enacted a district-wide backpack ban in all secondary schools in the area. While the intention of trying to stop school shootings is good, the method is laughable at best and downright stupid at worst. Not only is it inconveniencing the other students, who now have to find another way to carry their things, anyone could hide a gun somewhere else – a student in the University of Utah hid a gun under his coat. And even when parents asked the school to implement metal detectors or try to combat the bullying issue at Jefferson School District, they decided to take a stand in banning backpacks.

So, to annoy the school and catch the internet’s attention, students decided to post creative ways to carry their things on TikTok. A TikTok user recorded a video of a student carrying his books in a laundry basket and another used a toy shopping cart. Another student used a popcorn machine, one used a microwave, and a student decided to bring a sled. Other items included a traffic cone, a cardboard box, a cooler, children’s toys, a surfboard, a stroller, a rope, and a baby carrier.

And, this has happened for a while now – in 2018, a Florida school (because Florida man) decided to ban backpacks to make “every student feel safer” after the Parkland School Shooting. Shiocton High School banned backpacks in 2019 to eliminate tripping hazards in case of an evacuation and the possibility of students carrying weapons.

But, does eliminating backpacks serve to eliminate school shootings? Like many other Florida man ideas, no. Megan Humble, a mother of a student at the Jefferson School District said: “Removing backpacks is not a solution. It’s a knee-jerk reaction. It’s like slapping a bandaid in a severed artery and hoping it stops the bleeding. How does removing backpacks solve this? You’re telling me these kids can’t walk in with a gun on their person? You’re telling me that with oversized everything in style that a kid couldn’t walk in with a weapon just because they don’t have a backpack?”

Kimberly Funk, another mother, said “Banning backpacks isn’t the answer. Anyone can hide a gun on them. If this little girl was in the bathroom crying it sounds like another bullying case. That’s where you need to start; there’s a reason to why she had a gun and who she planned on using it on.” 55% of assaulters had made shooting threats, 62% of assaulters struggled with mental health issues, 90% of assaulters showed signs of suicidal ideation, 23% of assaulters had previously attempted suicide, and 88% of shooters under 17 mentioned that they wanted to cause violence (verbally or on social media).

But, can we stop school shootings from happening in the first place? Many have proposed giving proper help to troubled students. The Secret Service examined 41 cases, and they came to the conclusion that the perpetrators had already asked adults to help them and other students were aware of the danger. The assaulters were found to be depressed and angry students who were bullied by their peers and had mounting stress at home; with no proper mental health resources, they were left with no other choice. Promising intervention means include the use of behavioral threat assessment, designed to help schools give students assistance with their mental health. Mental health assistance has proven to decrease aggression and suicidal thoughts commonly seen in school shooters and improves emotion regulation and academic outcomes. Others have proposed installing metal detectors at schools, as it is a risk-reduction tool and one of the best practices to ensure safety. Although, both ideas are costly and not all American public schools receive a good budget. And, metal detectors have a limited utility and take time – officials will have to make students go through metal detectors in the morning and will have to be trained with the equipment.

Overall, there are many ways to protect students and teachers at schools, but eliminating backpacks is not the answer – it’s a Florida man headline.